During your stay at the Puits Rochais campsite in Vendée, whatever you do, make sure you set aside a day to visit the Puy du Fou theme park.

During your camping holiday near Les Sables d'Olonne we strongly recommend seeing some of the impressive shows on offer at Le Puy du Fou, often voted the best theme park in the world! This is a unique theme park in France located near the town of Les Épesses. It retraces the history of Vendée and France with the help of exceptional sets and staging. You will see history taking place before your eyes in a wide range of shows staged at Le Puy du Fou: gladiators during "Le Signe du Triomphe", a Viking attack and the "Dernier Panache" are all a delight for the eyes. The programme includes a whole host of special effects and dedicated participants, including the park's animals, which also play a big part in the shows. This is the case for the falcons, vultures and owls that make a striking appearance during The Ghost Birds' Ball. Needless to say they play a leading role in this high-flying spectacle!

The Puy du Fou villages and the Cinéscenie

Le Puy du Fou would not be such an immersive theme park without its four villages from four different periods. Here, friendly craftsmen will introduce you to their creations and art works. Stroll through the charming villages for a strange journey back in time in between two shows and get to know their various inhabitants. From the Middle Ages to a town in 1900, you are sure to discover some new things and some souvenirs to take home with you during your visit to the villages in Le Puy du Fou.

But what makes Le Puy du Fou such a success and gives it its international reputation is also its famous evening show that never fails to delight spectators. Over 700 years of History are told in the Cinéscenie during a breathtaking spectacle. Stunts, special effects, 3D video projections and over 2000 actors are all part of the excitement during a spectacle that will continue to enchant you long after your holiday at the campsite near Les Sables d'Olonne.

See all special Offers »
See all news »
Join us on Facebook

Discover the new website of the campsite "Le Puits Rochais" 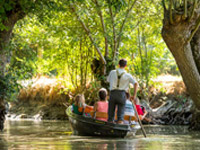